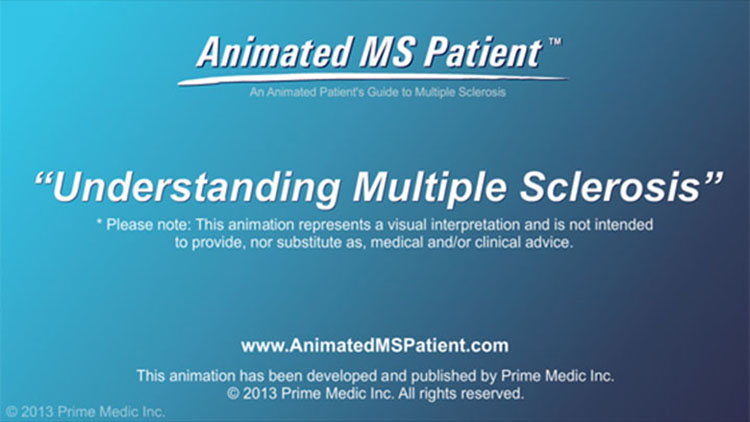 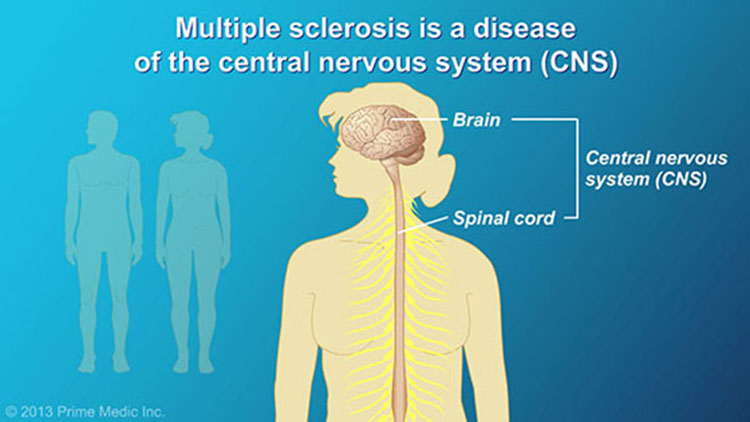 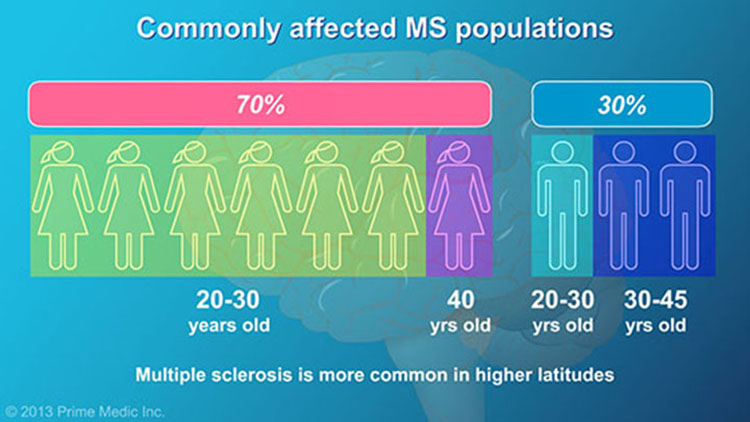 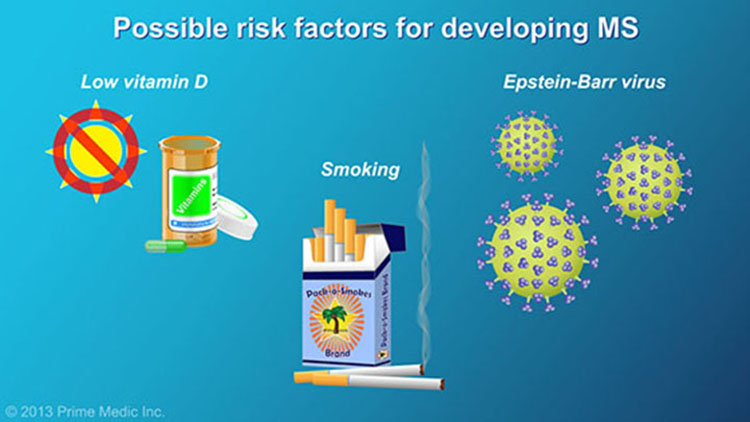 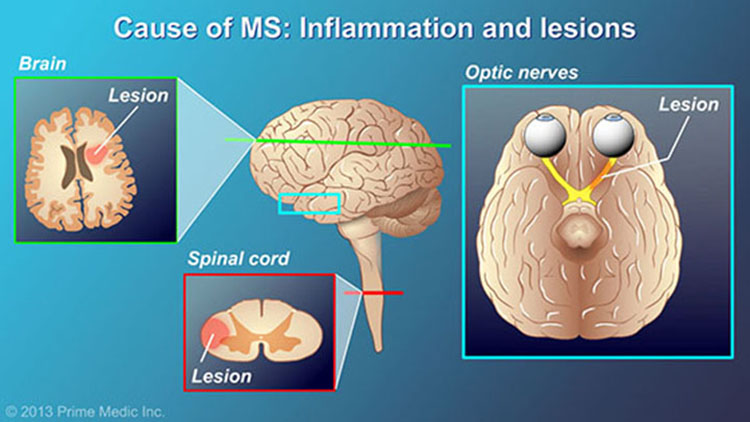 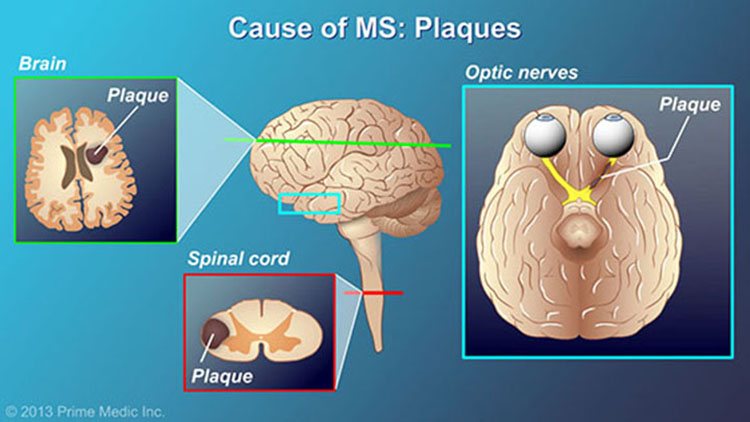 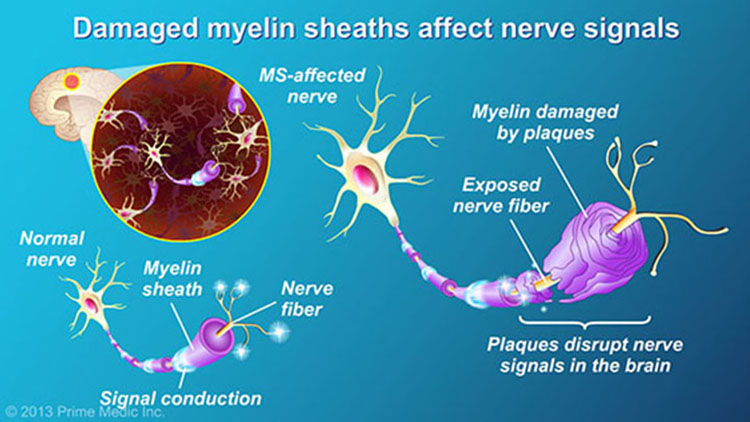 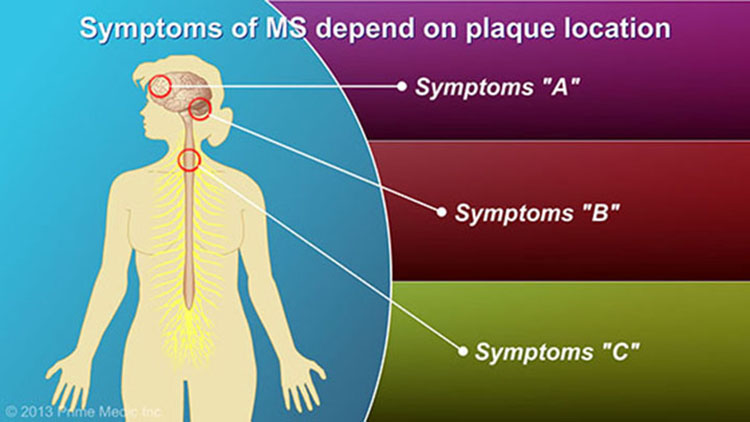 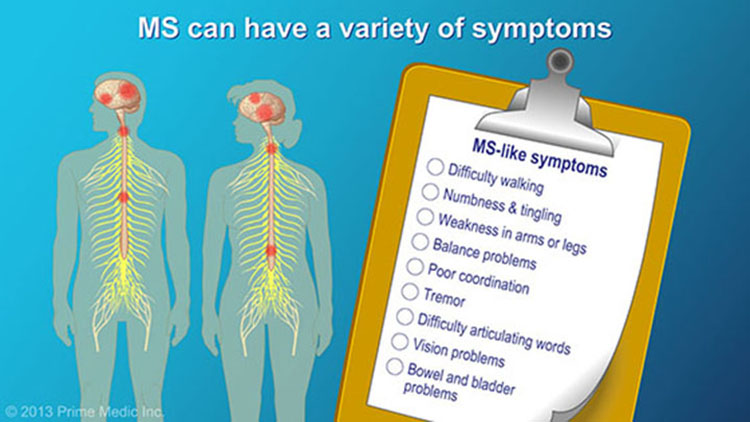 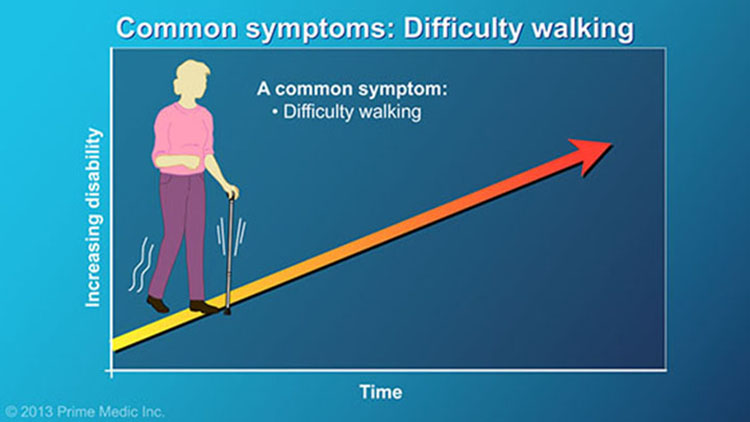 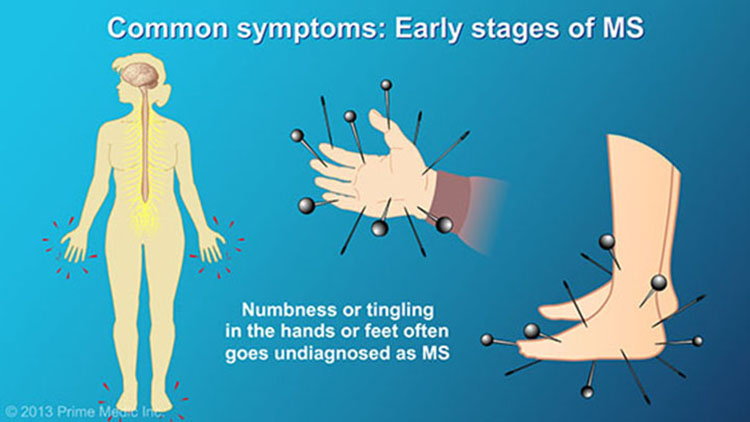 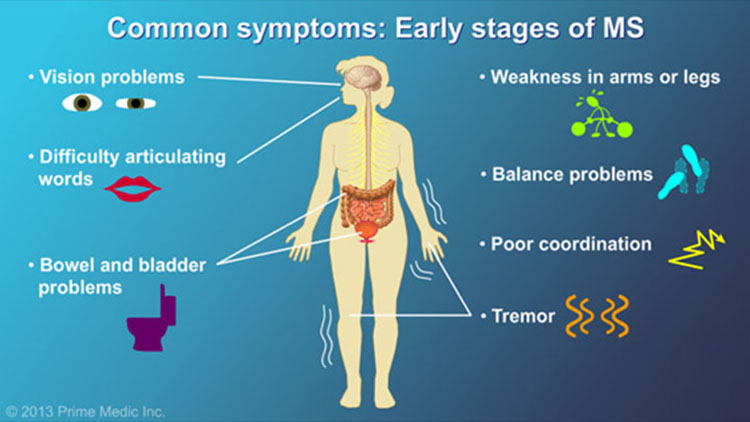 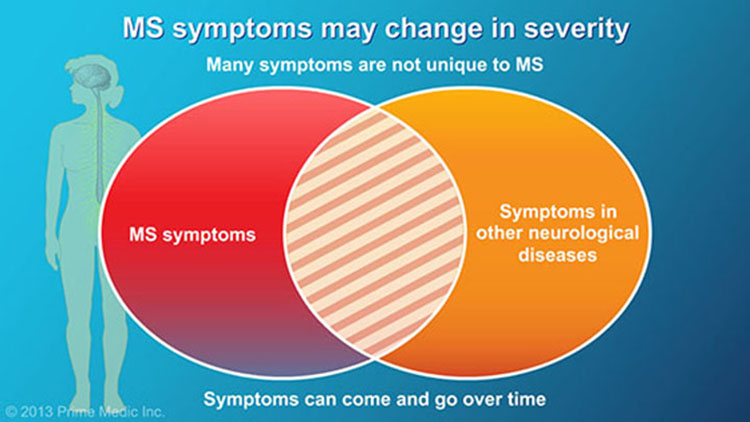 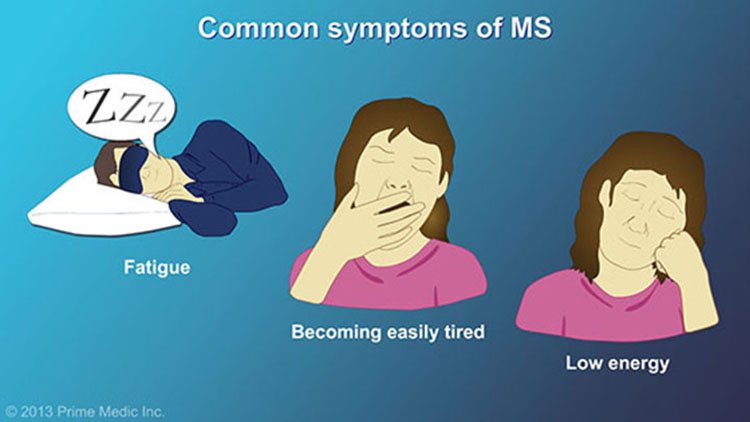 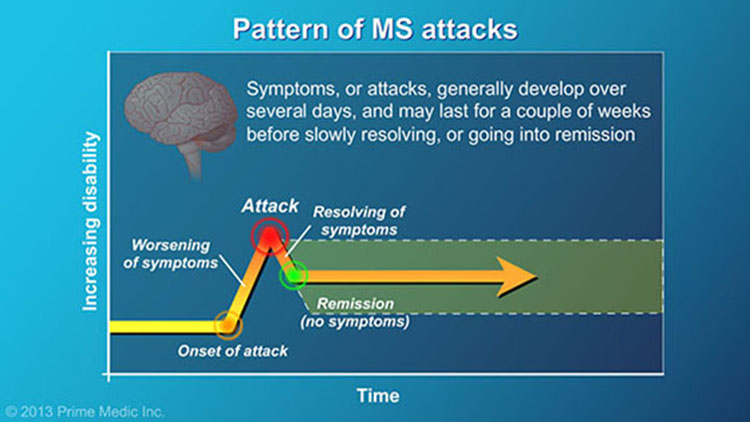 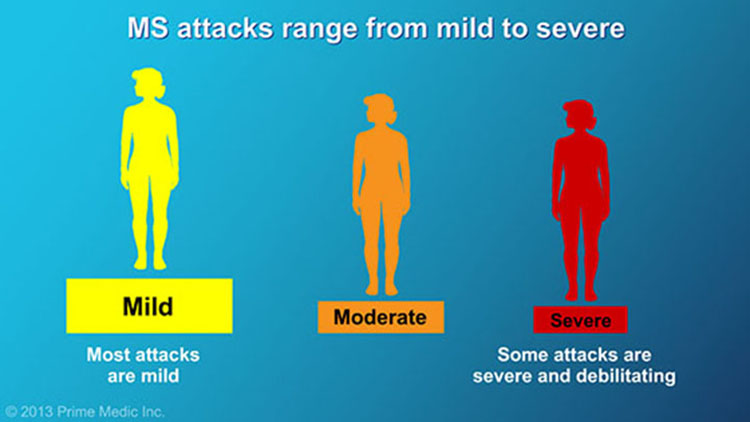 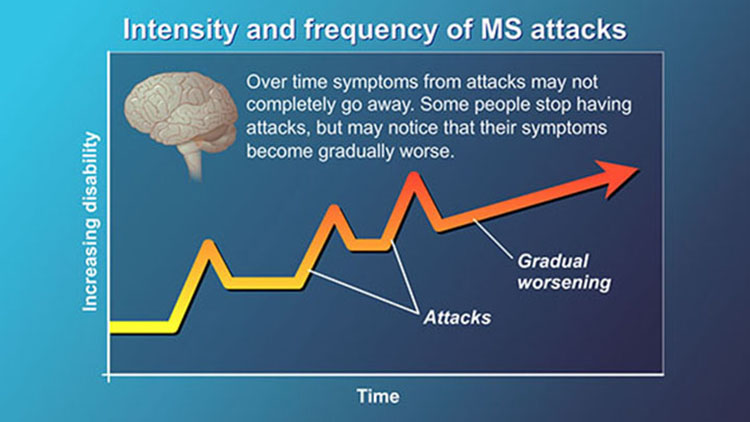 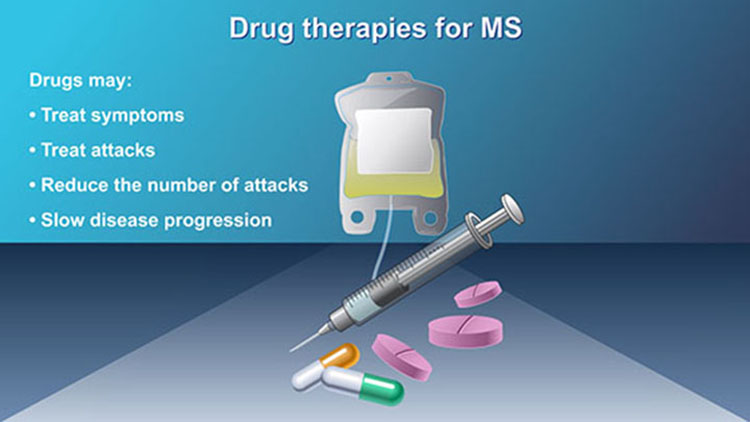 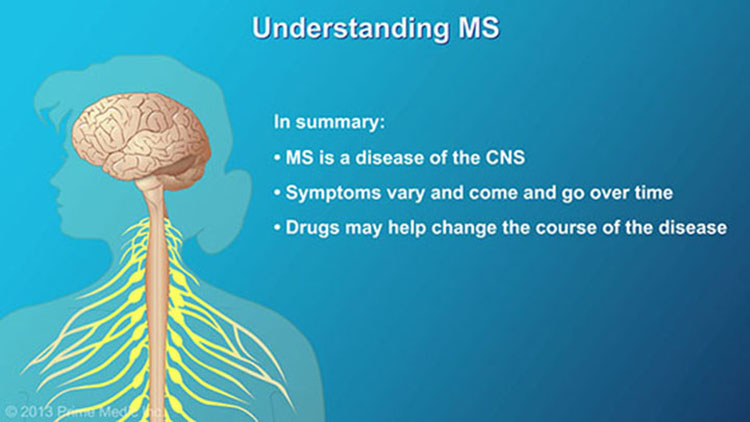 *Please note: This animation represents a visual interpretation and is not intended to provide, nor substitute as, medical and/or clinical advice.
Multiple Sclerosis, or MS, is a disease of the central nervous system (CNS), which affects both men and women.
It most commonly affects young adults, women more than men. It is also more common in higher latitudes.
Possible risk factors for developing MS include low vitamin D, smoking, and the Epstein-Barr virus.
In MS, inflammation causes tissue damage, called lesions, in the brain, spinal cord, and optic nerves.
These lesions harden into scar tissue called plaques.
When these plaques occur on the myelin sheaths that protect the nerves in the brain, the ability of the nerves to send messages is affected.
The symptoms of MS will depend on the location of the plaques in the brain and spinal cord.
MS can be associated with a variety of symptoms.
One common symptom is difficulty walking. In studies done before the introduction of disease-modifying treatments, some problems with walking developed in about half of people with MS as the disease progressed.
Numbness or tingling in the hands or feet is another common symptom in the early stages, but often goes undiagnosed as MS.
Other commonly-reported symptoms include weakness or loss of sensation in the legs or arms, balance problems, poor coordination, tremor, difficulty articulating words, vision problems, and bowel and bladder problems.
Many of these symptoms can occur in other neurological diseases and are not unique to MS.
What distinguishes MS is that the symptoms come and go over time or they may change in severity.
Fatigue, becoming easily tired, or running out of energy is another very common complaint of people living with MS. It can be quite overwhelming, especially during or just before an attack.
Symptoms, or attacks, generally develop over several days, and may last for a couple of weeks before slowly resolving, or going into remission.
Most attacks are mild, however some can be severe and quite debilitating
For some people, over time symptoms from attacks may not completely go away. Some people stop having attacks, but may notice that their symptoms become gradually worse.
Therapies for MS are aimed at treating the individual symptoms, treating attacks when they happen, and changing the course of the disease, such as reducing the number of attacks or slowing progression.
In summary, MS is a disease of the central nervous system. Symptoms and severity vary from person to person, and come and go over time. Drug treatments may reduce the number of attacks and slow progression of the disease.
An important goal of the healthcare provider is to help people living with MS understand and manage their disease.
Please rate this content:
Understanding Multiple Sclerosis
Animation - Understanding Multiple Sclerosis Slide Show - Understanding Multiple Sclerosis
What is Multiple Sclerosis?
Expert Video - What is Multiple Sclerosis? Expert Video - What causes Multiple Sclerosis? Patient Video - How did you find out you had Multiple Sclerosis?
Symptoms of Multiple Sclerosis
Expert Video - What are the symptoms of Multiple Sclerosis? Patient Video - Have you experienced fatigue with MS? Patient Video - Does heat make your MS symptoms worse?
Outcomes for Multiple Sclerosis
Expert Video - What is the typical progression of Multiple Sclerosis? Patient Video - How often do you see the doctor for your MS? Patient Video - How has MS changed your life? What advice do you have for others? Patient Video - What is your advice for those who use internet for MS resources?

This slide show describes the causes, common symptoms, and the nature of multiple sclerosis, as well as various types of drug therapies used for the treatment of the disease.

This animation describes the causes, common symptoms, and the nature of multiple sclerosis, as well as various types of drug therapies used for the treatment of the disease.

Jointly sponsored by the Annenberg Center for Health Sciences at Eisenhower and Prime Medic Inc. in collaboration with Postgraduate Institute for Medicine.

This activity is supported by educational grants from EMD Serono and Questcor Pharmaceuticals, Inc.

This website is part of the Animated Patient™ series developed by Prime Medic Inc., to provide highly developed visual formats of learning for patients to improve their understanding, make informed decisions, and partner with their health care professionals for optimal outcomes.